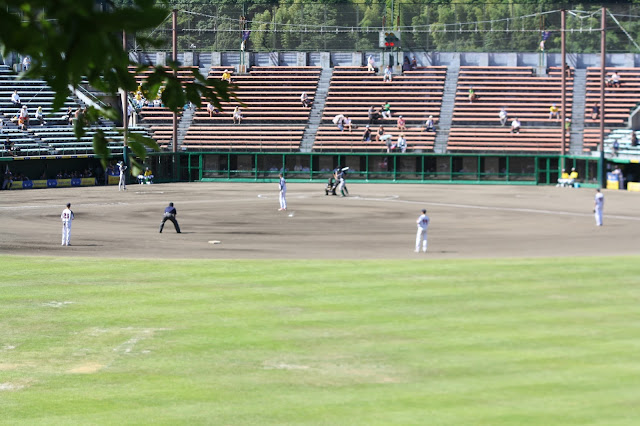 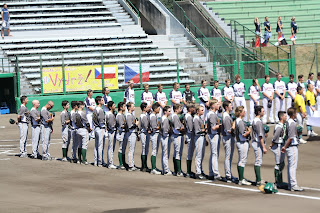 Arriving at the Taira Baseball Stadium today, we were met by searing heat at a ground where there was no sun protection for the crowd. Like the old Doug Walters Stand at the SCG hill. A punishment meted out by the Gods for the reckless and sun lotion free punters. Concrete stands absorbed heat, reflected heat and provided heat to the baseball diamond like a huge pizza oven. On a bright 30 degree afternoon, the only relief was with gusts of refreshing breeze, which came and went like a teenager’s car. The national grey jerseys were ruffled gently by the massaging breeze, but stood strong and proud through the anthems of both sides. Parents nestled in to the shade on the outfield hill, appearing in silhouetted bliss. Supportive voices echoed with good intention. The huge crowds had dissipated.

It was a green and picturesque ground nonetheless, with a magnificent leafy perimeter, showering the bleachers with precious shade. A manicured infield provided a tremendous stage.

A different looking infield line up graced the park today and with it came some improved standards early on. More intensity and more precision. The team stood as: Chris Burke #3 as catcher; Ky Jackson #5 at 1B; Daniel Bannon #2 at 2B; Jo Stevens #18 at 3B; 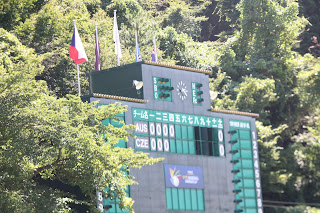 Benjamin Fierenzi #7 at SS; Liam McCallum #4 at left field; Hayden Lyberopolous #10 at centrefield and Caleb Shepherd #26 at right field. Taking the mound was Liam Evans #8 who was intent on pitching us to an opening victory.

From the get go, we attacked…perhaps to a fault. Fly balls and ground outs abounded as we batted like millionaires in some respects. From another standpoint, to attack them and dominate may just have cracked them, but it soon became a struggle for both teams. Frustratingly, we made contact regularly, but not powerfully. We did not impose our will on the game. Instead, it soon became an arm wrestle.

The scoreline of 0-0 became a repeat affair throughout the early stages of the game. Like a dour EPL game. Liam Evans our starting pitcher though shone brightly. His power and guile dominated with six strike outs. He was impressive in his sense of purpose and relentless focus. He was even enjoying himself it must be said… 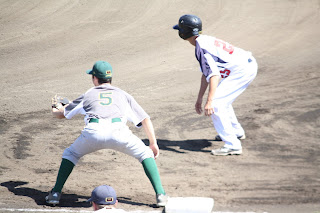 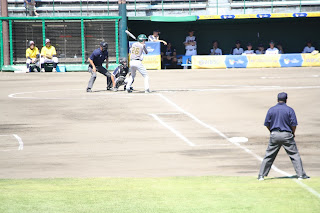 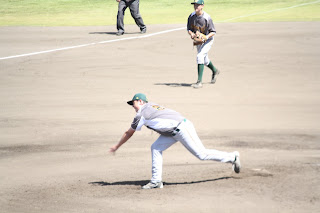 On the dark chocolate sandpit of a field, we were becoming more wasteful with impressive hits to both Stevens and Fierenzi going unrewarded. By the time Stevens cracked a beautiful shot to right field and the ball corkscrewed its way into the right field corner, a muffed run down by them secured Stevens on third base, while Fierenzi cleverly helped himself to an extra base when their poise fell to pieces at this point. Our anticipation of much desired runs was short lived.

Lame ground outs and simple pop up catches were the order of the day. Liam McCallum included.

It must be said that their pitcher hardly tore through us, but he was metronomic in his reliable nailing of the strike zone. No mean achievement when the umpire was only paying flies landing on his sunglasses. Strike outs of our boys were like late Tokyo trains…non-existent. When coupled with a tremendous double play by Fierenzi and Bannon in the fourth, our flag was flying even more proudly from the stubborn donut of a scoreboard. 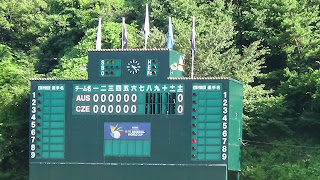 Evans’ single hit to centre field then provided more joy. He was having a day out after pitching so well and retaining his position in the field at first base. Before long he secured a perfect out from first at home in the fifth to deny the Czechs a go ahead run. Chris Burke, the catcher, also had a tidy day and showed some strong leadership at key times to compose his pitchers and re-focus them at clutch moments. Great maturity. Like Caleb Shepherd who drew two really important walks through sensible leadership at the plate...and stole a base.

These Czechs though would not bounce. Declan Croker in relief kept things tight too. Good speed and a great change of pace. Two strike outs. However the walks continued. That is impossible to defend. The blue shimmering mountains in the distance represented the elusive nature of our quest for a much needed victory...clear but unreachable. 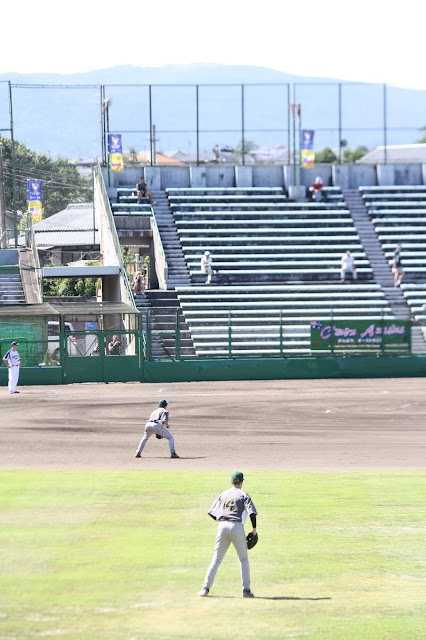 In the sixth with two outs and loaded bases, Blake Cavill, the young dynamo from Cronulla in NSW got us out of immense trouble. Pace. Their pivotal pitching change also gave us hope. 0-0 and on a knife edge into the seventh innings (of nine). Bannon’s hit similarly gave us a glimmer. However it was snuffed out through careless and wayward decision making by a batting order whose strike power was lacking today. Impatience, and haste chiefly.


We had seemingly brought a comb to a gunfight. 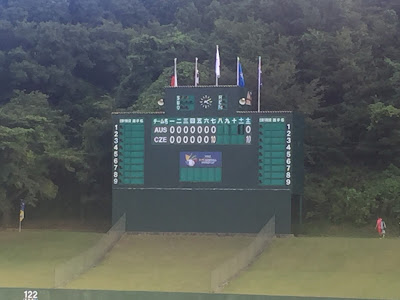 Our batting thus far in the game (and in the tournament) had secured no runs. None. This does not win many baseball games.

Then out of nowhere, a clever Czech double steal play nailed us in the seventh to get runners on two and three. Checkmate. They converted this into an early 1- 0 lead in the seventh which saw Cavill replaced and then the fireworks began.

Lucky bleeders into the outfield scored a couple…a pass ball…walks…an error at first…an error at second. They were suddenly playing checkers with us. Caught in the middle of this were pitchers – Maxim Watson and Dylan Walsh. Sympathies have never run so deep – nor has bad luck. Accuracy waned under the scoreboard pressure and in trying too hard to correct a grim and declining situation. No runs unfairly increased the oven temperature for our pitchers.

Walks, hit by pitch, chinkers in front of outfielders. It was all the Czech’s way. We seemed helpless and simultaneously lacking in ruthless desire. Our infield was quieter than a Japanese train carriage.


Remarkably - and unbelievably - 0-0 had soon blown out to 10-0 in the seventh innings and as the eleventh walk of the game was surrendered by us, their excited team surged onto the diamond. They had out enthused us and outmuscled us…even out thought us. They chanted and hollered and reassured each other across the journey of the game. We hoped in relative silence, limited in spirit and wasteful at so many times.

Five of our hitters did not hit today. No runs were scored. We gave away 11 walks across the game …nearly three runs. We made a lot fewer but critical basic fielding errors at key times of concentration. The killer and the hunger today was lacking in uniform quantity. 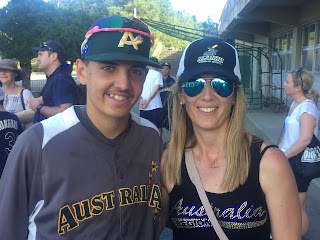 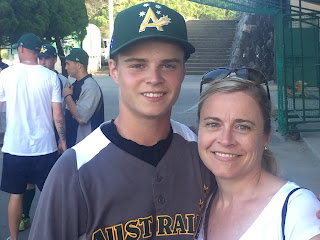 The national jersey, quite plainly, deserved more from many more boys today. It was not there consistently and the utter humiliation of a mercy or annihilation rule loss to a moderate but respected European opponent will forever serve as a sullied memory on this campaign.

At this stage of their young lives, the boys' youthfulness does not always bring a common understanding of tradition in the green and gold. They will learn the strength and history on their respective journeys. They will also learn the brutality of international play.

This is a rare privilege bestowed on the most fortunate and most able. The only solution is to strive harder – and achieve redemption.

The challenge is clear. Cuba are chewing on their cigars from afar, waiting for us to roll into Nambu Stadium tomorrow. The smiles and reassurances of parents can only get you so far.

The boys know it better now than ever before. Ferocious competitive drive is inescapable and imperative. It will take each boy to draw on that wonder and talent that earned them a plane ticket to Tokyo. All is not lost. Onward we march. 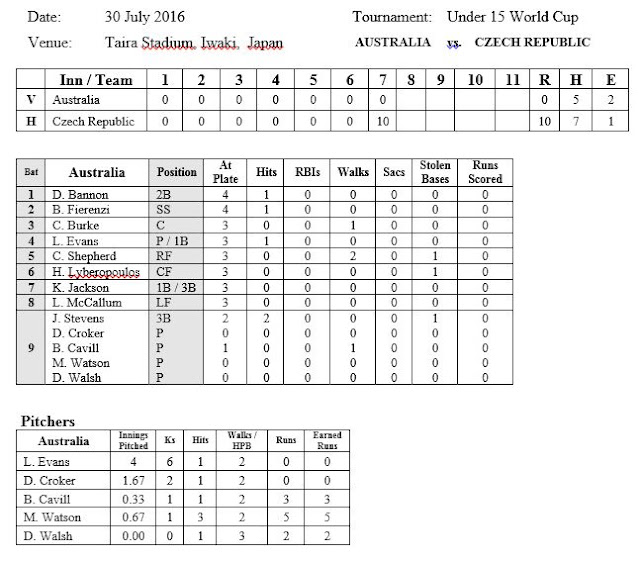