Ruminations on a Train to Iwaki.

The sacred hieroglyphics of an ancient world locked in its splendid silence hang from the speeding walls of tradition.

Routine and practice. Practised and routined with thoughtfulness and stifled joy.

Pristine hygiene and expectations of honour and grace mirror soft care for others and rich respect for self.

Dignity and integrity abound with a strength and determination for patient excellence.

Wheels rumble silently, stoic and courageously ploughing fields of busy hats on their dissecting journeys of clarity and vision.

Windows smile back at visitors new and curious, agile and accepting, warm and inviting.

Contributions valuable and valued to a station of glory deliver suits and fluroscent modernity.

A world of precious glass and glasses which knowingly gleam on an innocent perfection. 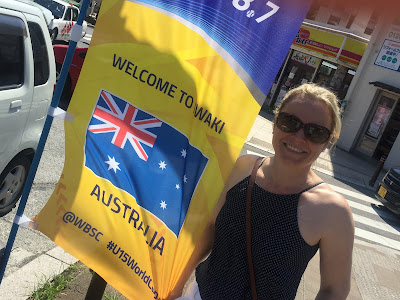 And so it was…the monorail from Tokyo’s Haneda airport to Ueno delivered us in our brutal anglicised simplicity…shorts, T-shirts and sunglasses, contrasting magnificently with the grey pants and white shirts of serious businessmen and well dressed women whose pained faces spoke voluminously against the male hierarchical world of Japanese order. The 25 degree early morning heat reminded everyone of a hurrying weekend.

As our very fast train accelerated into the distance, the high rise and industry at the centre, soon gave way to sparse temples and communities hugging green foothills of the quaking backdrop of blue and black shaded mountains. Sprinkling the area stood towering steel mantises carrying electricity for the neat and quiet surrounding neighbourhoods. Rice paddies appeared and disappeared, trees and gardens appeared unexpectedly as concrete freeways scarred the innocent landscape. Brilliant blue skies absorbed all hopes and fears insisting on calm contemplation.

The journey of the fans to a World Cup is laced with learning and culture. Wending your way through ticket offices, broken English and railway platforms becomes a reflex. The miles travelled by plane, train, taxi and any other transportation are as immense as the excitement it brings.

Yet ahead lay an evening of great promise and possibility. A powerful host nation and a younger no less determined rival whose 21st Century world does not always follow a script. We had been handed an unenviable privilege in playing Japan first. National interest. National television coverage. The opening ceremony to the tournament tonight would be as glamorous and as predictable as any other, but the pride of the Australian jersey always makes it exceptional. Camera batteries were loaded, video cameras charged and green and gold clothing dusted off with a certainty and belief in each one of the boys selected. 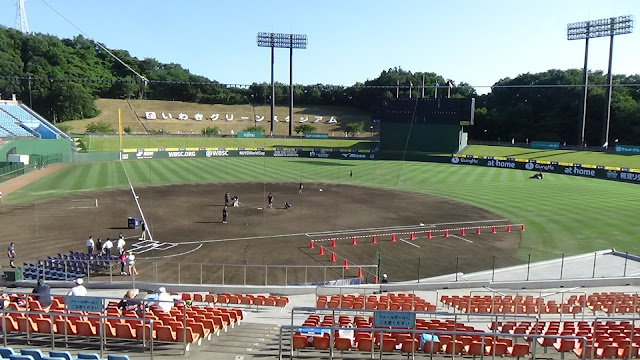 The anticipated large local crowd did not disappoint in the large and wonderful auditorium of Green Stadium Iwaki. A lot less than 20,000, but certainly around 5,000. Noodles in hand and beer or water in the other, they are a happy people who admire the spirit with which the game is played. Cheering good play, exalting the brilliant moment and gasping in despair at anything less than excellent

And there we suddenly were...our sons stood in front of the Australian flag as our anthem sounded with all its energy and might. An extremely proud moment so far away from home. A choir of proud parents singing from a songbook of hope and anticipation. The livestream at home was about to go into overdrive. The well wishes from the baseball community was pronounced, warm and extensive. 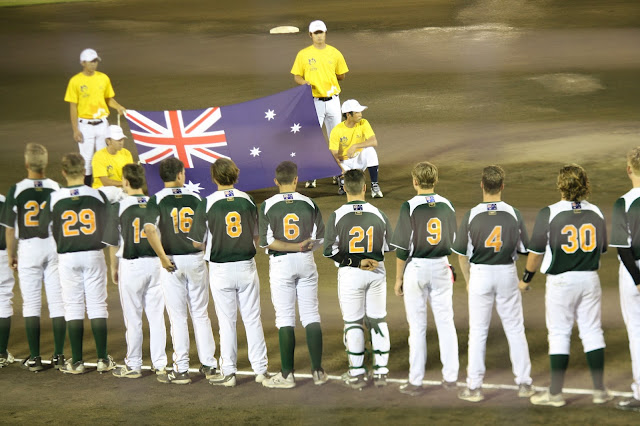 Our first defensive innings was an ideal launching pad. A brilliant double play by a languid Martin and his considerable reflexes was added to by a neat pirouette and throw by a supremely athletic Fierenzi at second base. We matched them with aggression early. Stevens drew a sensible walk, before Caleb Shepherd launched one that might only have been caught by one or two boys in world baseball at this age – and he found one such person. A tremendous diving catch with luck deserting him. Compelling contact.

At 0-0, the parents were comfortably absorbing a fine and warm afternoon in the setting sun. Imposing light towers headlined the twilight while the scoreboard stared down with serious impatience. 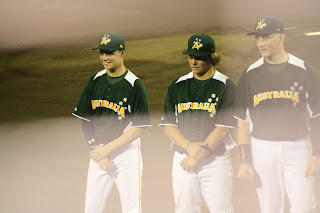 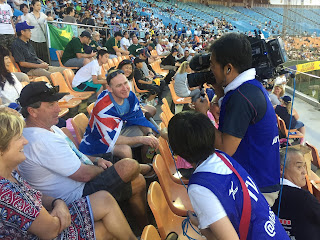 Our second innings however will not feature in the career highlights reel for many – nor will Peter Overton be adjusting the tie and announcing it at 6.00pm. Hits followed hits, a walk was peppered with a balk and some sloppy fielding in the infield presented Japan with opportunities you can ill afford to provide. It was suddenly like minding the neighbour’s dog and seeing it escape. Vulnerability.

The generosity of our boys was striking. Loose throwing, nervous gloves, full base path distances, pitcher changes, a hit by pitch. A cocktail of calamity. Perhaps trying too hard. The lights and glamour of the local live feed and television coverage may have distracted a few. Night baseball would also be a new phenomenon to most as well. Who knows, but it was uncanny – and unacceptable by our high standards. Before we knew it a 7-0 scoreline boomed down after such a promising start. A familiar chirping voice by number 4 of insistence, beckoned in left field.

However, not to fold – never to accept defeat – the towering Townsend earned a timely walk, reminding everyone present that the Australian bounce and zeal was not defeated regardless of adversity. We looked to hit and strike outs were minimal. Our outfielders were busy. Strong ground fielding and exceptional catching were the hallmarks there. 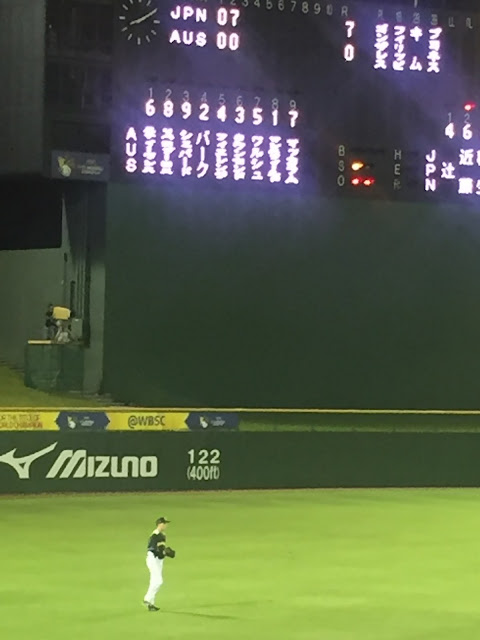 Yet the Japanese baseball juggernaut was immense. They hit us like golfers. They ran the base paths like they owed money and their smiles expanded like the swelling crowd. They were gracious and intense, ruthless and decisive. The pitcher’s body language is never studied so brutally as it is by Japanese players and coaches. They can sniff any hint of alarm. Composure and deception is all. The resolve of a pitcher is tested with lazer precision under the watchful gaze of the Japanese team and crowd.

And suddenly Zac Mansfield, a rangy leftie from Queensland took up the reins at the hill, under immense pressure. He executed quite well. Persistent and crafty. Yet we were drinking from the fire hydrant. 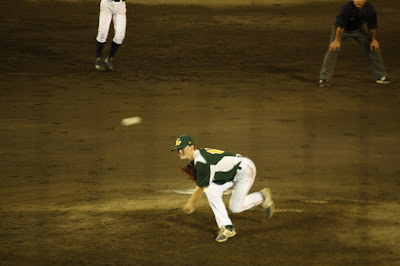 At 11-0 down, Liam McCallum, batting at number nine, then strode to the plate with an air of confidence and determination. His maturity for one so young is impressive. His love for a moment is powerful too. He then unleashed a cracking blow to the right of a sprawling, diving short stop who had no right to make it look so easy. His turn and throw ended that glimmer, but reminded us all of the spirit we possessed as a side – and the cruel wonder of Pythagaros’ theorem where a squared plus b squared does not equal the brilliant speedy throw of c squared.

Fly balls, walks and strike outs continued until the heavy curtain of the third innings was pulled. We were on that long queue at the supermarket when the other one was moving far more quickly.
Into the fourth innings, Fierenzi launched a scything hit to centre right to ignite our chances and it brought an approving roar from the crowd. But we could not muster enough support to reach home…pitches were chewed up, but that telling hit was as rare as a Japanese after school detention. The arrival of Tom Horne as pitcher announced another imposing body to the game. He pounded them in and restored a calm composure to a by now still evening.

With 12-0 against us. Liam’s second at bat brought a rousing cheer when a half infield mishit skewed to the right of a clambering second baseman who did not beat the batter to first. A hit. Liam did not hesitate in kindly assisting the umpire with his own “safe” call too. Generous. Convincing. 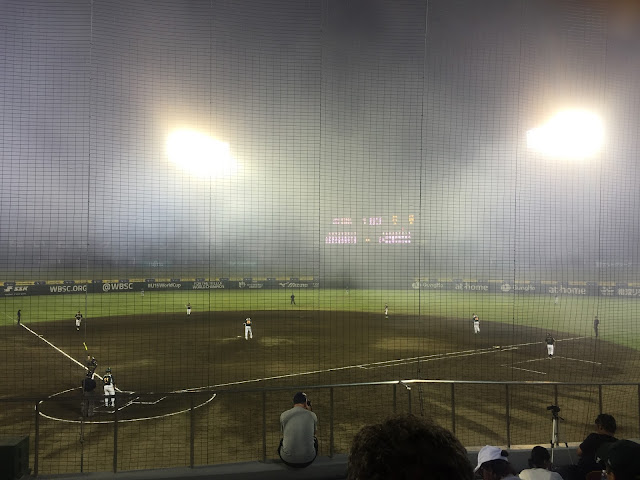 Seemingly predictably, a double play ended the possibilities there – and very soon the fireworks celebration of the end of the sixth innings also very nearly ended the game as a cloak of smoke descended onto the ground, making fly balls harder to locate than a NSW State Labor policy. Gruesome comedy really. Caleb Shepherd at right field though was immense under fire, snaring an outstanding grab running backwards. The sac fly brought it in to 13-0. Compelling and commanding right there.

In the sixth, Daniel Bannon showed intelligence and got on base with a walk, before Townsend crunched one into left field. The hits and good moments sadly were not strengthened by repeat business. We left runners on base all night. Like a reality TV show, when all you wish for is the contestants to go home.


Amidst the smoke, the noise and the piercing lights, the game wrapped up at 13-0. A loss founded on a savage treatment and price for any error or half error we committed. We made six errors. The Japanese ability to capitalise on weakness is well known historically and in their national sport. Our ability to put ourselves in that position when under considerable pressure is hopefully the lesson learned. 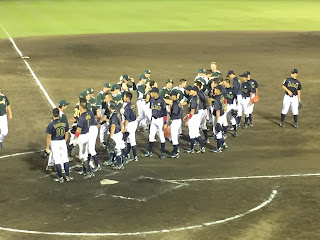 Liam’s final ‘hit’ in the bottom of the seventh which spiralled high in front of left field – and spiralled safe – probably summed up our night. Desire, but not crisp. Hope but no lasting, imposing result. Learning and growth however are the close friends of any loss.

The team bus was no doubt a solemn and reflective ride home…but an enlightening one for all the boys who had visited the washing machine, were hung out to dry, but who will be back crisp - with even more passion and commitment tomorrow. Permanent material. The good sportsmanship of the Japanese was also a significant memory as the players warmly greeted each other and exchanged pleasantries post game.
A world of precious glass and glasses which knowingly gleam on an innocent perfection. 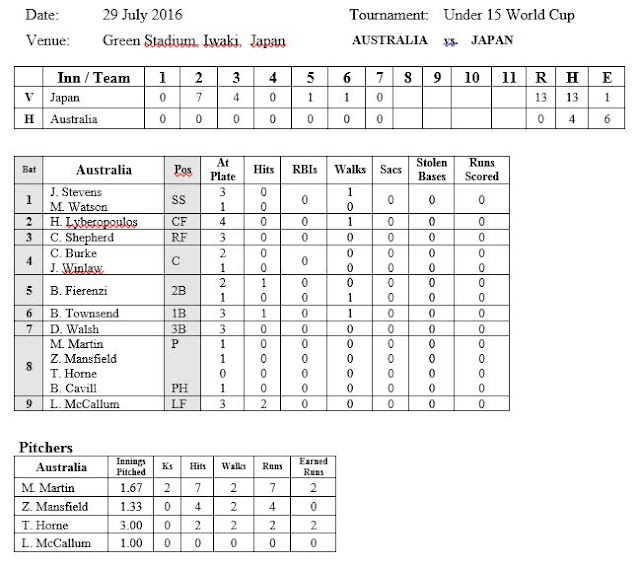