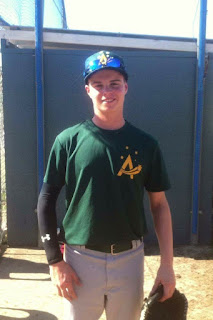 In the lead up to the Australian campaign at the U/15 World Cup in Japan, all boys were required on the Gold Coast at the Australian Baseball Academy on 21 July 2016. Most other boys this age were due back at school. Their preparation camp was conducted in hotter Queensland conditions mirroring the expected conditions abroad in a steamy Japan. Games, drills, tactics. This dovetails into the annual Australian Baseball Academy for older players which operates at this time of year on the Gold Coast too.

The importance of this World Cup campaign to Baseball Australia is best captured in the world ranking points that each country accumulates at elite tournaments like this. This impacts on the world ranking enjoyed by the country, with baseball's imminent (?) return to the Olympics one of the key drivers and factors. When your sport is on the Olympic agenda, much more government funding and more opportunities come your way.

There are serious contributions that the U/15 boys can make to the overall success of the country's baseball program through a strong showing at this tournament. Serious stuff. Plenty of fun...plenty of focus. Lots of hard work under the watchful eyes of a host of our strongest coaches and minds.

The U/15 Australian Baseball World Cup team arrived in Iwaki, Japan earlier this week and are now training and participating in preparation games at present against local Japanese teams.


Australia holds the honour of participating in the opening game v host nation Japan on Thursday evening 28 July 2016 under lights to kick off the tournament. This will be heavily attended by local baseball mad fans. The crowd could be towards 20,000 – believe it or not. I will provide some pics of this to verify!

The area the boys are playing in is just south of the Fukushima Prefecture where that tsunami damaged the Japanese nuclear reactor some five years ago. The locals are recovering from the devastation and this tournament is part of the healing.

This short film is one of the most devastating timelapse films of that tsunami you could ever hope to see: https://www.youtube.com/watch?v=spg62-MrYpQ

The Japanese are proud folk and will not tolerate mediocrity – on both sides of the playing fence.

Interestingly, on his journey to Japan, Liam has chalked up some flights and frequent flyer points between selection camps, tours, prep tours and a brief family vacation.

There is a massive commitment involved. A 24/7 global existence with the world literally being your oyster.

"There is no knowing how many miles you need to travel to achieve your dreams".

As a sidelight, a recent  baseball game in New Hampshire, USA (the Fishercats Team are a AA minor league affiliate for the Toronto Bluejays), had this batboy as common practice.

Pretty unusual, but the crowd loved it. Not all players keen on the teeth marks and slobber. Well worth a look: