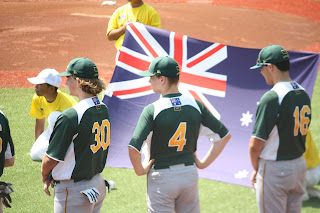 Under burning, searing skies today, the world seemed to be on fire today in Iwaki - and so was the astroturf field at Nambu. While the weather was piping hot at about 33 degrees and greeted both teams and supporters with a sharp ferocity, the ground temperature off the astroturf would have even been a few degrees higher. Plastic soles on the shoes felt like the carpet at Kick's niteclub. A soaking chow mein of heat suffocated. Grass typically provides relief on such a day...an extensive mesh of endless synthetic finds you instead.


Yet our boys were unperturbed and intent on a victory over a rival of familiar character and belief. New Zealand were not to be trifled with - and never are. They compete well above their stocks in all sports they play. Our customs re-admission into our country seemingly depended on a strong showing. A strong haka kicked off proceedings and the real battle soon began. 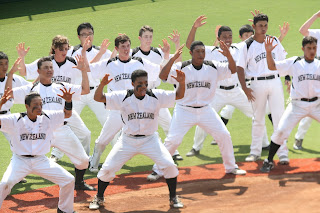 The early exchanges were tight. New Zealand exhibited amazing strength and finesse, encouraging and hollering for each other with energy and enthusiasm. Hollering, to be frank at this tournament, has blurred boundaries in many games as the pitcher is roared at in the point of delivery from opposing dugouts in an effort to sway or influence their performance. Gamesmanship more than sportsmanship...by a few. This is not unexpected at an international tournament, but has challenged the mindsets of a number of our pitchers. They know it is high stakes and that there is no come back. 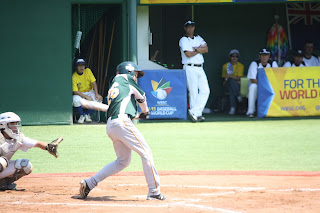 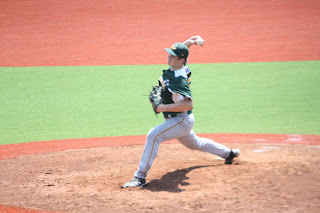 The other key lesson learned by some of our boys here has been 'the reachable run' which is built on an immediate sprint as soon as you hit it. 101 baseball, but sometimes forgotten in disappointment. The reach, the stretch and the extra step will be rewarded with lazer precision by first base umpires here. Not like the often lazy presumption often witnessed back home. Never regret that last step!

Early errors by us in the infield have been compounded by more errors soon after across the whole tournament. Lapses in concentration have cost us dearly. Walks then add to the misery. Every walk is one out you did not get.

Soon enough New Zealand bumped away to a 2-0 lead. Then with two runners on base and a well drawn walk to Liam McCallum, bases were loaded. Daniel Bannon's infield hit got us to 2-1. Our lingering frustration to convert runners on two and three to runs continued. Two sharp double plays punctuated the first and second New Zealand innings and our self belief strengthened.

In our third innings Caleb Shepherd soared a triple over right field and scored on the sac fly from Liam Evans. Windlaw made a hit to centre right...left on base... In response, they hit over centre right for a triple, for us to remain 2-3 down.

By the fourth innings, Kortekaas then reached on a sprawling infield hit. Liam McCallum's sac bunt pushed him over to two. Bannon was hit by pitch before Caleb Shepherd again hit powerfully down the first base line for 2 RBI's...4-3 up. A couple of Kortekaas strike outs got us away at 4-4 after four completed innings and a lot of New Zealand fight and determination. It was tight.

The arm wrestle was on and we were struggling more than it looked. New Zealand were looking the stronger. Then the most remarkable thing... 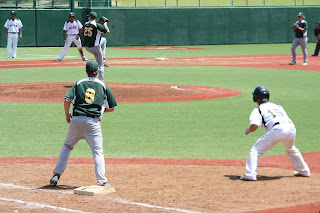 At the start of their fifth innngs, Tyson McKee #16 came on to pitch. Nothing remarkable about that only this: Tyson had tripped over the dugout steps in coming onto the field on the first night against Japan, injuring his ankle. Here was his moment. Then within two pitches, his pitching hand was dripping blood. He had cut his finger on the ball when gripping it in a freak injury. An injury time delay. A return, but his tape was judged by the umpires not to be permissible (extra purchase on the ball possibly). He was out of the game after two pitches. Ironically, in his only at bat just before this, he was hit by pitch. Not in the bum thankfully because that would have just about got his dad walking to the airport. Extremely unlucky!

With Kortekaas replaced by Thomas Horne as pitcher, a hit, walk...HBP...error at third base, a.left field hit, a dropped catch in left field and we were up against it. 8-5 down after five innings. Panic.

Another phenomenal moment. In the sixth innings we scored 14 runs. Yes, 14. The innings stretched on like a T-Ball game, but hits to Evans over third base. Martin, JD Windlaw, Dylan Walshe, Fierenzi, Shepherd, Martin a second hit, Walshe another single to left field, Horne a three run triple over centrefield...Liam a sac fly. 19-8 up. Breathe. 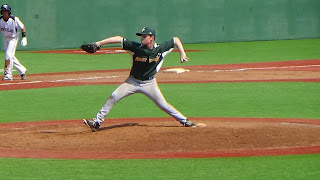 Not to be outdone, New Zealand rallied again. A pass ball took it to 19-10. Nerves. It soon became 19-11. When yet another hit by Walshe to left field scored Shepherd for 20-11, we had reached an NRL score. There was more than a try in it at this stage. Or more than a goal for the AFL fans.

Maxim Martin then came onto the mound and pitched with good pace and accuracy in the New Zealand seventh and eighth innings. He did some hard yards here to strengthen our position and did not disappoint. Nor did he disappoint the young Japanese fans post game either. He is a popular, tall and imposing figure. Two ground outs and a fly ball to left field allowed 20-11 to stay. Two donuts! 37 pitches. 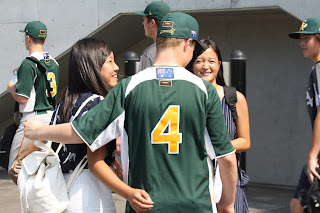 Liam McCallum then pitched the final innings, striking out one and securing two neat ground outs for the eventual victory at 25-11. He was sharp, composed and gave them nothing. An international tournament like this will make strong players strengthen their resolve. Our bats had hit well for the back end of the game and New Zealand had crumbled remarkably from 8-5 up to a 25-11 loss. An earthquake crumbling impact for the boys from the shaky isles.

By now the game had stretched into four hours in length. It was extremely hot, sweat dripped, shoes stuck, shirt sleeves became mightily discoloured, but our boys were strong and purposeful. We triumphed when it mattered, held our nerve, remained aggressive and deserved to be proud of our efforts.

For Liam, he was one of not many who did not hit today. Hard to believe. However here he is learning to be more versatile, to help the team in clutch situations, to be challenged in different ways. The coaches have been extremely reassuring and empowering for him. He registered a sac bunt, a sac fly, two walks and was caught at centrefield twice in well held good diving catches. Baseball can be like that some days. It equalises and rewards; frustrates and inspires.

Not far away, but today was about team play and he did that remarkably well and without fanfare or adulation at critical moments. The local fans still loved him post match regardless. The boys were much happier than the New Zealand coach (pictured below)! Liam has learned a lot in a couple of weeks which will make him more determined and more hungry for success. A formidable thought - and challenge. 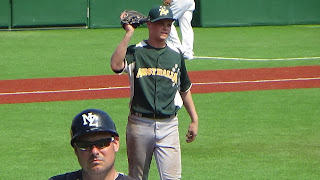 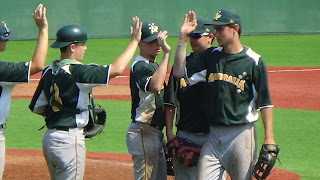 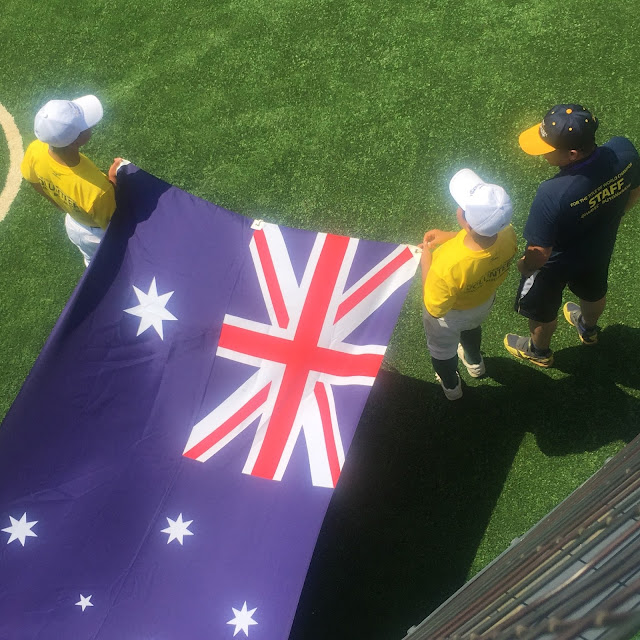