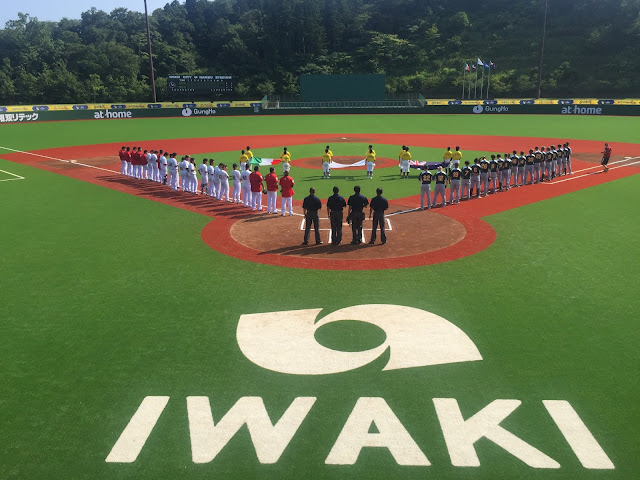 In our final game of the tournament, world ranking points still were up for grabs. As a higher ranked team than us, Mexico were there to be pipped and to help us end the tournament on a strong note and further the overall position of Australian baseball. An eighth placing beckoned out of twelve competing teams. This would be more satisfying and uplifting for our campaign which to be fair had not been as impressive as expected. In particular, the earlier loss to the Czech Republic hurt. 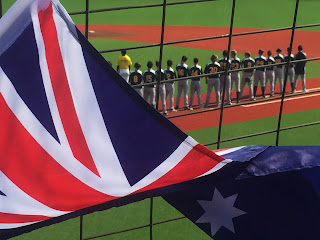 The tournament has been a tremendous experience for our boys. They have seen where they are at against the world. Humbling. Yet equally they can be inspired to improve and train harder. We can improve so much.

The game of baseball has again been highlighted as a truly world game. It so remarkably diverse and so international, making its attraction immense. To reflect that we have just played a snapshot of teams around the world - Japan, Czech Republic, Columbia, Cuba, South Korea, Chinese Taipei, New Zealand and Mexico - is amazing.

However, the telling stats for the Australian team across the tournament were:

Significantly, 64 hits and 64 gifts. Hard to dominate with that right there. A tough stage however.


********
The game against Mexico got underway in extreme heat of about 34 degrees again. At Nambu's synthetic field for a 3.00pm start, families came from near and far through taxis, hired cars and on foot. A dedicated beast the baseball parent. Greeting us at the ground again too were the local Iwaki high school, smaller in number, but loud in voice. Drums, whistles, green loud hailers and a song for each player and their 'player card'. Extreme, stifling heat early. 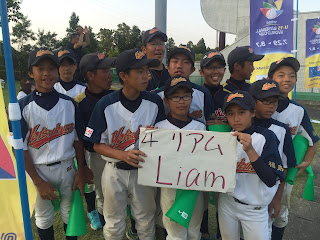 Blake Townsend #28 was our starting pitcher. A massive stamp of a young man whose power and strength is scary. His hitting ability too, while it had been limited through opportunities at this tournament, was also strong and true.

In the Australian first innings the Mexican pitcher showed us a tournament pitching lesson or two by being accurate, forcing batters to make decisions and allowing his field to support him. He threw within himself, to good effect. Strike out, ground out, ground out. 0-0. 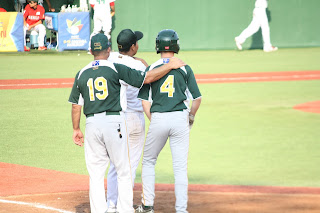 At this level there is no quarter given to anyone. Amazingly, the Mexican lead off batter knocked the first pitch he saw for a massive triple to make this point stick. A subsequent hit to left field scored him for 1-0, before an error at third, and a pass ball miss sent the score to 2-0 down. Don't blink. Townsend was under seige and looked like he was not throwing as lively as he had proven earlier in the tournament. His confidence waned..walk, hit by pitch. His afternoon ended too abruptly for his talent when he was relieved by Tyson McKee #16, who was back after the unluckiest injury of all time yesterday.

A resilient lad of strength set on an injury free afternoon to demonstrate his grit and iron will. He did not disappoint.

Our second innings saw Liam Evans secure a hit down the middle, Tyson McKee then hit to centre field, Liam McCallum was hit by pitch and so too was Daniel Bannan. We clawed one back for 1-4. Shepherd scored on a Martin shot and fumble by short stop and at 2-4 we were competitive. Real competitive. The self belief we witnessed at key moments across the tournament surfaced again...it was at times like Jaws - and sadly at other times like Flipper. 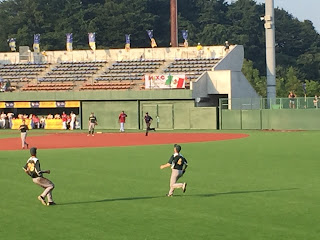 Tyson McKee meanwhile was doing a tremendous job. He was composed and accurate. He peppered the plate and was mixing them up nicely. Strike outs, run down and most significantly, NO walks. He relentlessly tested batter judgement.

Our fourth innings then saw two remarkable moments. Liam McCallum had a 12 pitch at bat. He fouled off each successive one at will, before eventually securing a really hard earned but pivotal walk. When Daniel Bannon brilliantly scored one runner from an infield hit, a scorching two RBI hit to right field by Blake Cavill put us 5-4 up. We were bouncing and spirited. On track and spirited. The Corona and lime was on ice (not much ice in these parts at this time of year I must confess, but let's imagine that for a second!). 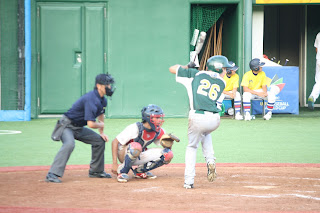 However, again in the twinkle of an eye, Mexico had one back on us for 5-5. McKee was on fire with ball - and bat. He had three hits for the afternoon as well. A tremendous and deserved comeback from some wretched earlier luck.

Unfortunately, an impressive, searing Burke double to left field was not enough to steer us ahead. The greater accuracy and patience by Tyson McKee lasted 4.1 innings - all with a recovering troubled hand - and had kept us in the fight. 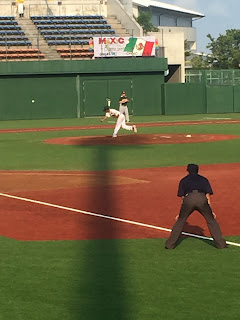 The lengthening shadows of the afternoon were diminishing the sting of the day's heat. Whispy wind gusts provided relief. Shade appeared like an old friend. The anticipation and excitement around the game was echoing loudly around the field which is literally cut into the side of a mountain. No neighbours complaining about lights here.


The Mexican sixth innings brought a change of pitcher for us in Declan Croker. At two out, he had pitched really well with great variation, but this baseball is an unpredictable animal of venom and menace when it turns. And turn it did...suddenly. Emphatically. A massive ground rule double scored one. A chinker to centrefield scored another. 5-7 down. Unlucky really. Runs were required from us - and fast.

All the while with our backs to the wall, the chanting and support from the local high school got louder for our boys. And try they did, but there is something to be said about power in baseball. Strength and power to knock the ball to all parts of the ground. At the age of fourteen or fifteen, a lot of our smaller framed boys struggle in this area. Finesse and skill is ever present. Power is not...yet.

In the Mexican 7th innings, Blake Cavill came on to pitch. A fly out to left field was followed by one back to pitcher for the out, before a wild pitch gave up a run to make it 5-8. The effort was there, the desire was there...at two outs and 5-8 down we clung on and really could not afford another run or it was curtains for our hopes and dreams. 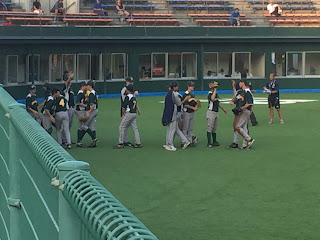 With loaded bases and our chances on the line, a massive centrefield hit by a burly Mexican saw Liam McCallum race backwards at good speed and dive over his shoulder - absolutely airborne - to take an absolute stunning centrefield catch. The picture below tells the outrageous story! Brilliant. And it was met with rapturous applause from the crowd and both dugouts. The high school cheer squad went berserk chanting his name (to which he gave a thankful modest half wave on the way back to the dugout). The team met him outside the dugout to acknowledge it. 5-8 and still in it... 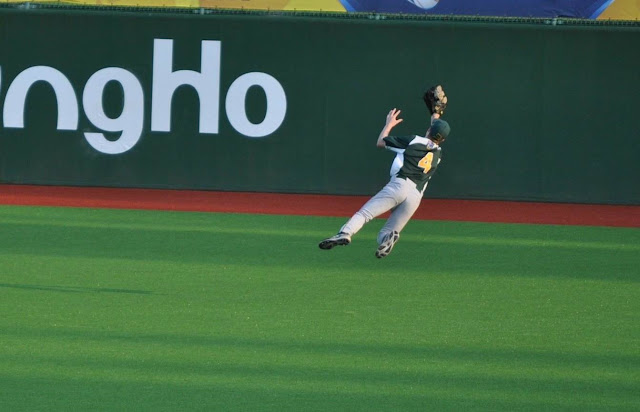 This then sparked an exceptional double play from the Mexicans. They turned up the heat.

Our ninth innings was it. Get three or more runs to tie it up or edge ahead - or we were done. Caleb Shepherd made a timely single to right field. Liam Evans reached on an error from short stop. Burke scrambled... 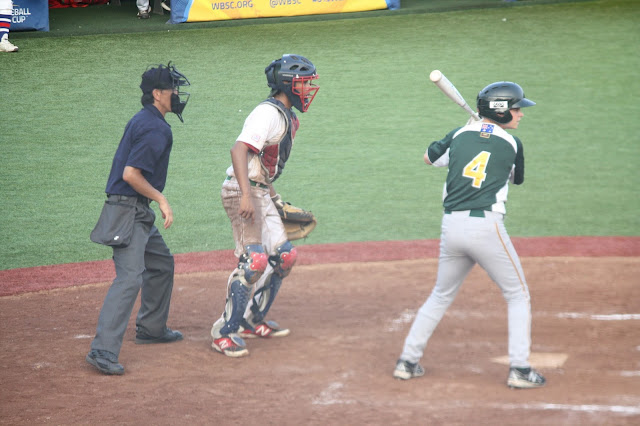 Liam McCallum was up to bat with loaded bases, two outs. He had the killer in his eye...ready to hit. A stage made for any young baseballer of talent and ambition...and then disaster.

Our second base runner was thrown out by their alert pitcher, getting too far away from the bag. An incredible anti-climax which just about summed up our tournament of missed opportunities and losing pressure moments when we needed to be smarter or stronger of mind. Parents looked glumly into the shadowed field, cameras were retired, loud hailers were laid to rest..heads shook...shoulders slumped. A 5-8 loss.

*************************
And so it was that the tournament was suddenly over. A wonderful tribute to the local high school saw the Australian team management donate six baseball bats and all of our baseballs to them for their efforts. Photographs were taken, memories were absorbed and friendships forged around the hotplate of each Japanese baseball field were temporarily set aside as thoughts and arrangements for return travel plans rapidly took over. Hopefully these connections will be rekindled at the National Championships in January 2017.

The stretch of this great game of baseball - worldwide - was reaffirmed and is best captured in the following graphics showing Australia's (Sydney) distance from that of our opponents at this tournament..from Europe to Asia, to Oceania and to Central America. 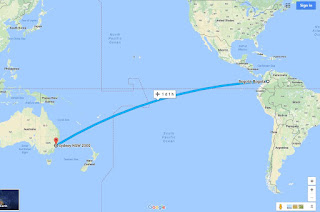 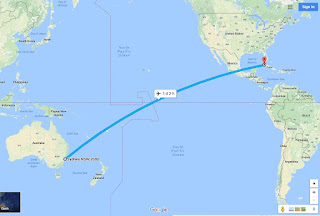 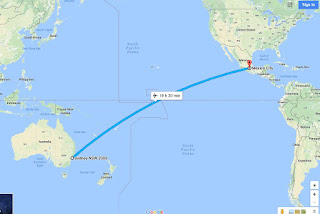 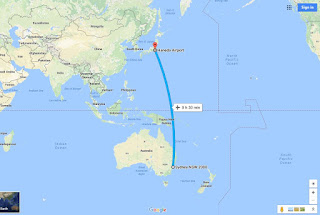 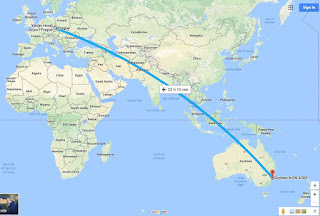 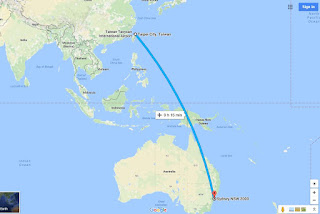 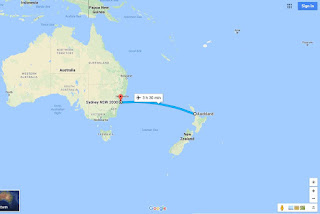 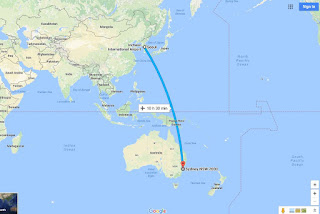 It had been some sort of journey. An unmissable journey. A journey laced with the generosity and joy of local Japanese people who were so polite, so obliging, so structured, so timely, so giving and who taught us all life lessons around the beauty of humanity in all its simplicity and splendour.

Mateships have also been born and developed for life. Irreplaceable experiences and learning will travel with each boy as they continue to become young men of substance and purpose. The game has given them a lot already. Time and energy of their many hours on the training paddock is now the gift each one will give back to the game. After this experience, they will each demand it of themselves. 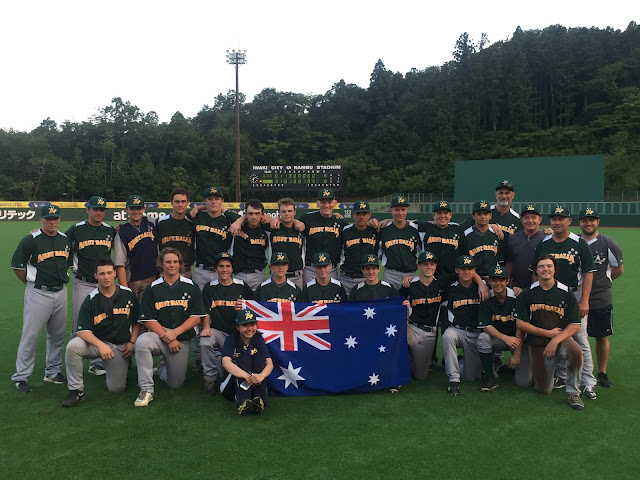 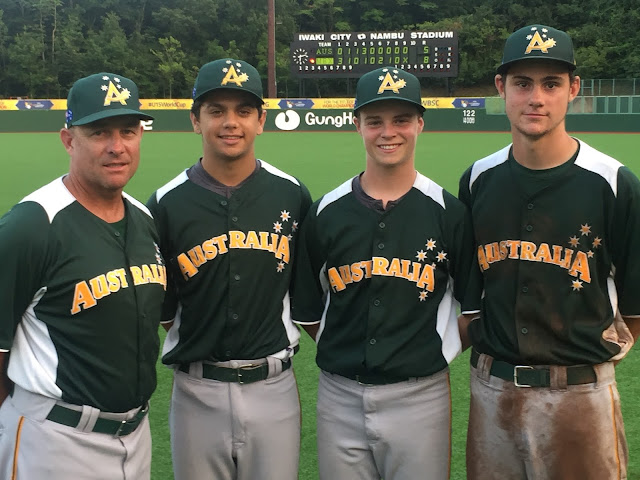 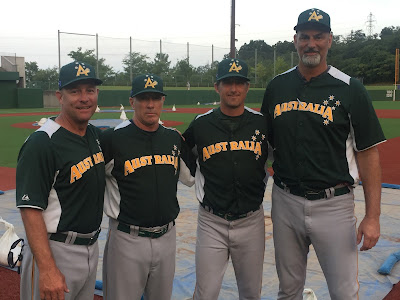 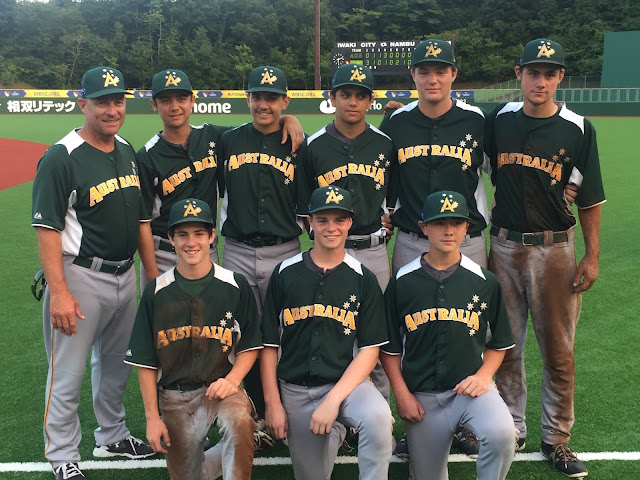 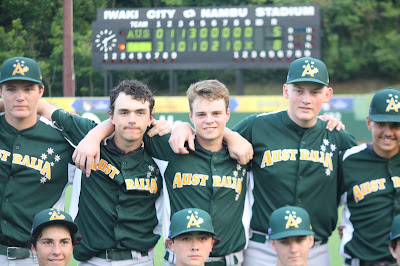 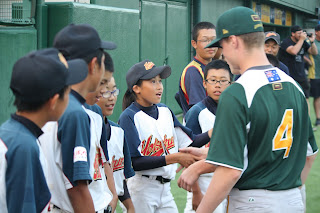 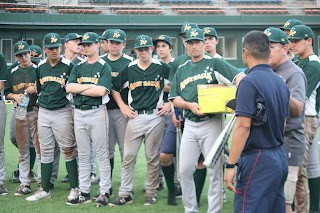 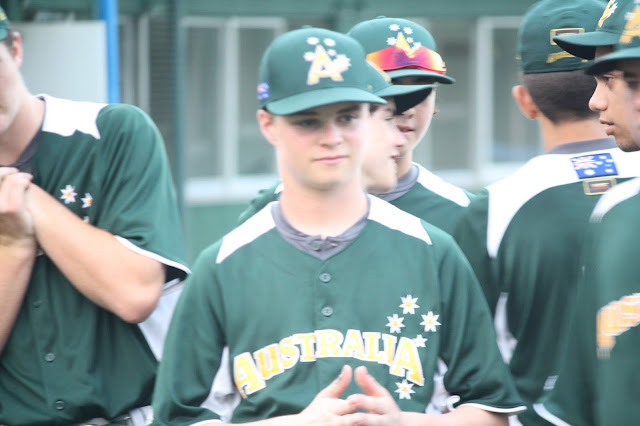