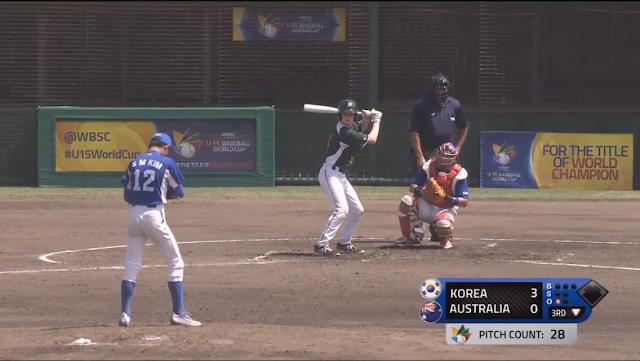 Today was a fascinating study in how the human spirit can rekindle and excel against the mightiest of hurdles. With apologies to Seoul, Korea (and The Killers)..."I got soul, but I'm not a soldier".

Arriving for a 9.00am game in Iwaki's Green Stadium brought the twin delight of guaranteed shade and individual plastic seats. Small mercies. For some of our parents who have walked many miles to get to the grounds in stinking heat and humidity, driven many miles with recalcitrant sat navs or travelled in trains for two and a half hours, these things matter. 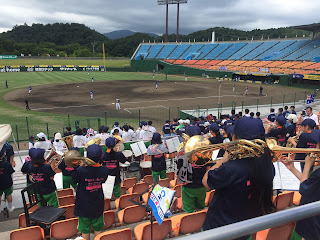 The Iwaki Green Stadium is an excellent showpiece and we were treated to our second outing there - and on Livestream back home - against the much more fancied Korean team. Their pride and ability in baseball presented us with a strong and dominant adversary. As a South Korean you develop a strong mindset regarding danger and imminent threat.

Our boys arrived late for their preparation today at the ground and it seemed to help. They were fresh and crisp in manner, attitude and appearance. Glenn Williams, the High Performance Director of Baseball Australia and former NSW High Performance and MLB legend, arrived for today's game too. The stars were aligning and the boys knew it.

Regardless, in a game of high stakes (Korea would progress to the finals with a victory), we needed the same military precision known well in Korea. 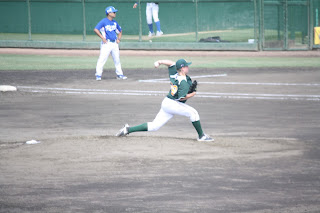 Declan Croker #29 was assigned our starting pitching duties and got away to a bright start with it 0-0 after the first innings. Croker was in the spotlight but seemed at ease. For us, Hayden Lyberopolous #10 reached on an error at third, but was soon brilliantly picked off. At 0-0 it was tight.

It was not until our tremendous double play in their second innings that we sent a message of greater precision and a warning shot was fired over the parapet. We were here to play. 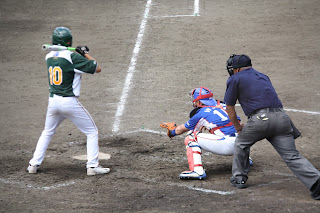 After some nervous walks and a startingly bad piece of luck when a hard hit ball hit first base and rebounded away to score two runs, Maxim Watson strode to the hill in relief. A towering young man of humour and good cheer. He exhibited every piece of excellent body language a pitcher should possess and he got down to work. The game started to turn our way. A strike out from Maxim to tidy up the third innings after a 3-0 lead saw us steady and regroup. He provided breathing space for us to work from. The composure set a standard.


Then Liam McCallum strode to the plate as batter number eight and smashed our first hit of the day over into right field. Great contact.


With that, Hayden Lyberopolous was soon in action, powering a brilliant double to centre right and scoring Liam. 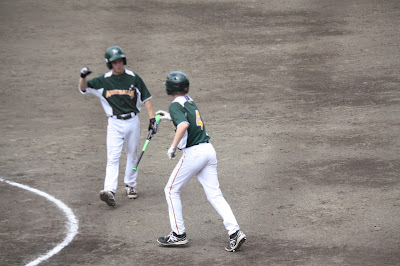 This was followed by a searing hit over right field to Jo Stevens who scored Lyberopolous and made it 3-2. Stevens has played brilliantly more often than not. He is composed and battle hardened. He can play - no risk. Then a hard hit by Shepherd forced a fumble and Stevens scored for 3-3 in the third innings. This was the moment in the game when we announced ourselves. Clearly and purposefully.

All the while Maxim Watson powered through the pitching work. He gave up one walk and one hit in three innings of pitching. He was tremendous under pressure and set the game up wonderfully for the team.


At the same time the local Iwaki High School band played like the clappers throughout the whole game - including their version of Queen's "We Will Rock You". No flares or torches from beneath their chins. just sweat and perseverance. Their support of our team and our boys was awesome and really set the stage for our boys to perform. Chants, songs, drums, music...we were annoying the opposition no doubt through this raucous support from behind our dugout.

(As an intriguing sidelight, post game, the team visited the high school and were treated like heroes. Daniel Bannon we were told was their Australian Brad Pitt. It is a huge event for the local people here. They are rebuilding and have a strong love and desire to make this event work. The people are friendly and gracious. They save you repeatedly...showing you how to cut calamari at a restaurant, calling a taxi when you can't speak the language, directing you to the correct train station platform, providing you with free wifi at a moment of need...amazing. They are problem solvers one and all).

We headed into the fifth innings with two quick outs and then as fate would have it, a really unfortunate dropped sky ball at second base into the sun brought an end - somewhat unfairly - to the great work of Maxim Watson. A very nervous Blake Cavill came on and was spraying them around like a viking birthday party. He was as nervous as a window cleaner in Lakemba. Two walks, a wild pitch, but good pace...two strikes....then a thrilling moment... 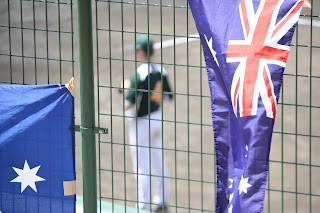 At loaded bases and mounting pressure - extreme pressure - a stunning foul ball catch against the right field bull pen fence was executed with courage and skill by our right fielder, Caleb Shepherd. His team oriented focus and drive for victory saw him belligerently slide into the opposition bull pen triumphantly signalling that the impossible catch had been taken. This moment was pivotal in the course of the game and acknowledged as such by his energetic team mates. Caleb's leadership here was immense as the boys returned to their dugout with no damage. It could have been a terrible twist in the game. 3-3 it sat and stayed. Remarkable and telling in the scheme of a tight game. 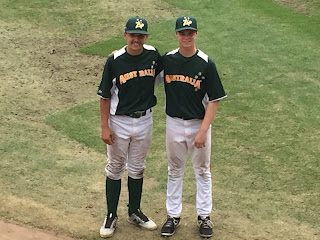 With the school band shrilling and humming in our sixth innings, we sadly could not capitalise further. Cloud rolled in, like the menace from the north, making the Koreans nervous. Our parent voice also reached fever pitch levels as the excitement of a possible victory loomed.

A walk to Caleb Shepherd further underlined his sensible, mature way, guiding other boys in the art of astute baseball. A hit to right field by Ky Jackson and a pass ball put runners on two and three...we were poised. Reflexes of a cobra..sting of a marshmallow as it turned out. 3-3 it remained.

By the seventh innings Blake Cavill was more composed and a different person. Rhythm. He secured ground outs and strike outs with poise and patience. He is a gamer and knows victory like an old friend. He had suddenly transformed his approach and began to dissect the opposition. Remarkably, he then made a hit with the bat in hand to get on base in our eighth innings. The spotlight was on him.

Inexplicably, but a product of our pressure, a wild error throw by the Korean pitcher on a pick off attempt to first enabled Blake Cavill to get to third base and when the throw came back across to no one, he headed for home. The go ahead run,,,the out...the struggle...a roaring crowd...a stray trumpet...It appeared he was carrying a piano - or a billiard table - but that was the crowd's illusion and sense of anticipation. Safe! In a flurry of dust and mud, the run scored for us to take the lead - 4-3 up. Relief and steel. 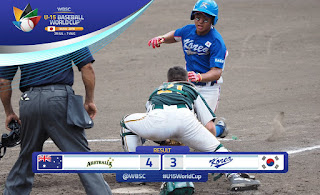 Notwithstanding a Bannon infield single, complete with a desperate slide into first base and outstanding base running speed, we were still precariously positioned. Stevens hit again, Shepherd bunted..all the tricks in the book.

It came down to one innings, three outs required as we stood at 4-3 ahead. The Korean supporters and dugout started zeroing in on Cavill trying to ruffle him and upset his poise and control. They clearly didn't know he has brothers and wonderful mental toughness. Excessive targeted and belligerent chanting...thankfully he never studied Korean in Year 7 Languages classes.

Blake Cavill was immense when it mattered in their ninth innings. He is young of years but huge of heart. But it was not over. A mighty early straight hit nearly took his head off, flicking his glove on its journey to centrefield and then a catch at left field by Liam McCallum brought us closer. 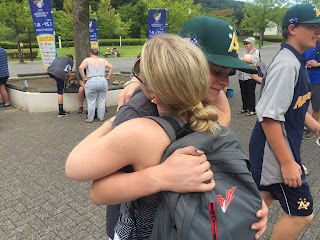 Not to be outdone, the Korean runner was crafty and was suddenly on third base as the tying run. A great play at home by our short stop Jo Stevens and the very solid JD Winlaw #21 as catcher, got rid of him (see picture above) and when Bannon made a safe play to Jackson at one, we had won our first game 4-3.

The excitement was unbelievable and Blake Cavill had not only scored the winning run but saved the game as pitcher. Rare gold. The winning moment and celebrations are included below:


Today was about redemption for some inconsistent and disappointing moments thus far. However the breadth of hitting, the teamwork and enthusiasm and the brilliant composure at key times reminded us all of why Australians are special people and why our spirit and resolve is enduring. Gotta love this sport. 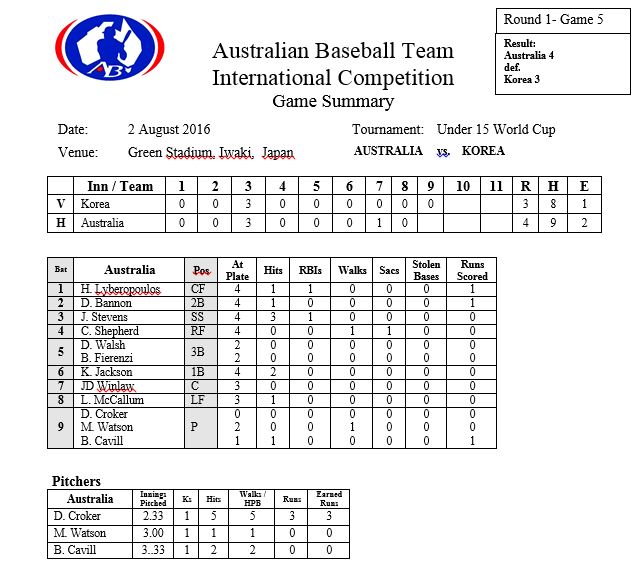